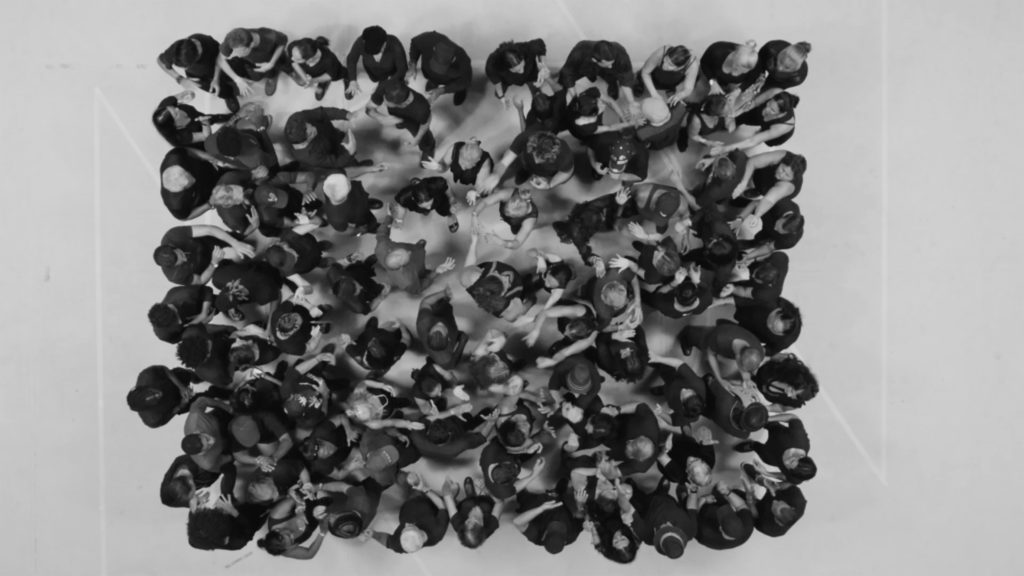 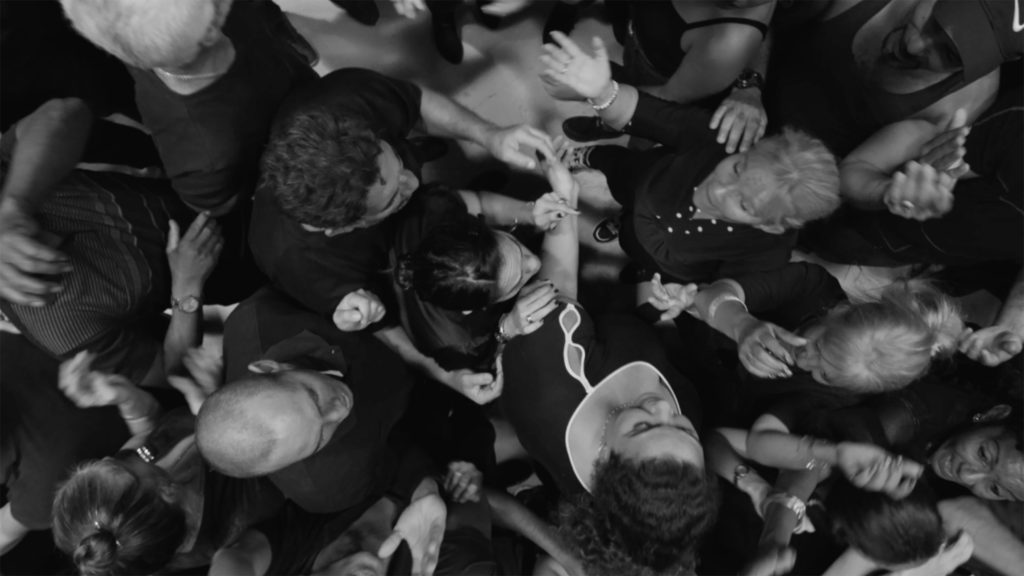 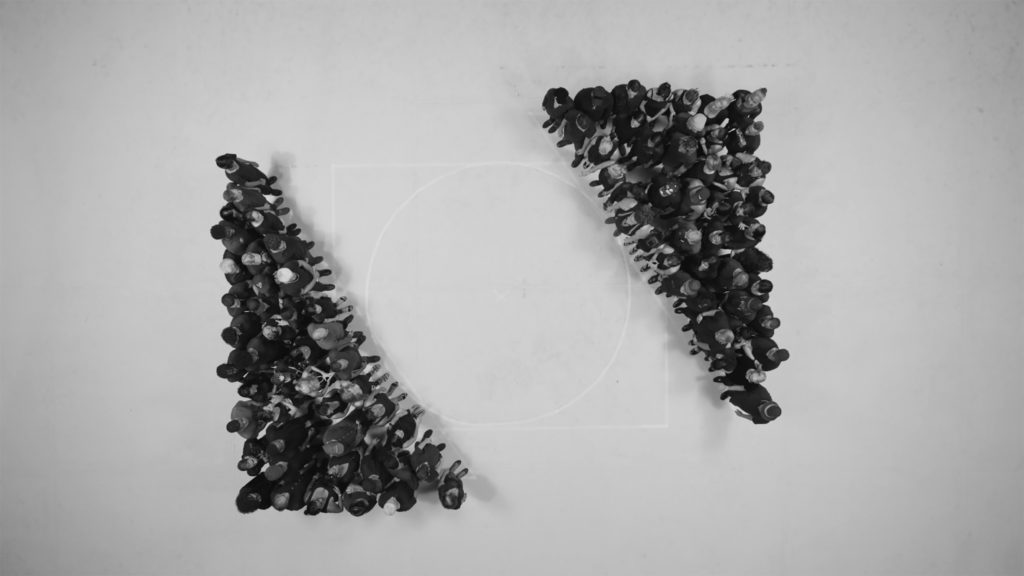 Every creative process, in order to differentiate itself from a succession of worn-out images, evokes different symbolic possibilities within a renewed spatial and temporal structure.

In “Popular Geometry”, Dagoberto Rodríguez plays with the importance of forms, the symbolism of fundamental geometric figures and the existential questions of human groups in contemporary culture.

With a simple narrative, this video piece addresses the staging (with 100 people) of three geometric figures (the square, the triangle and the circle) as they relate to and confront each other, taking into account the aesthetic and symbolic differences between them.

The square is the archetype of order, a measure of proportion (all sides and angles are equal), and represents the earth in contrast with heaven. It is the limited as opposed to the unlimited.

Many of the sacred spaces in most religions and rites have a square or rectangular shape, where the 90 degree angle is of vital importance. Temples and military camps used this elementary figure. The symbolic systems of India and China are based on the order implied by a figure such as the square: permanence, security, balance, integrity, morality and a clear capacity to organize space rationally.

The Chinese, Persians and Mesopotamians believed that the earth was square. For Plato, the square together with the circle embodied absolute beauty. For Islam the human heart had this shape because it was open to 4 sources, the divine, the angelic, the human and the demonic. And they said that since the prophets did not have the latter, their hearts were triangular.

Squaring the circle is a square within a circle of equal area. It’s more of a symbolic problem than a geometric one. Alchemists related it to the coincidence of opposites, the identification and transmutation of two components into a higher synthesis. Bringing together the material and the spiritual. Squaring the circle reflects man’s effort to deify himself, this concept has appeared since the Renaissance and is, perhaps, the essence of all the things that Malevich and the Russian Suprematists were searching for.

By conjugating and transfiguring these fundamental geometric figures, the scenic variations of the piece display a semantic intensity contained within the history of art and specialized aesthetic attention.

In this artistic proposal, the symbolic forms recreate existential issues and questions of the coexistence of human collectivity.

It is from the commitment and recognition that the artist makes that men develop their existence in symbolic systems and under veils of rituals.

These formal games accompany man through this journey supported by repetition and the exercise of overcoming stabilized improbability, showing the traces they leave when trying to overcome them.

Having found the pattern for a new sequence, this staging proposes a new vision, a place to re-start another series.

The symbolic is always an enlightenment where the impossible, the unguessed, the unspoken, surrenders to the co-creative possibility of the spectator.

The ternary represented by the triangle contains the secrets of creation, the principle of all things within our universe.

“The Tao begat the Unit,

the Triad gave life to all things.”

The square is then divided into two triangles and this division acquires rotundity thanks to the strength of the new space that challenges and protects us.

Human groupings, establish as a key, a family, a similarity in the unseen.

This piece intends the transfigurations to be precise and dynamic, that they be fixed in the poetic memory, so that the images can capture the repetition of a finding and a new way of living together.

We are separated only by delicate and brutal lines that define us and at the same time demand a consensual identification, from a broader perspective, we also seek greater distance and clarity.

Creation looking for a fluid dialogue to retake the first movement, to return to an impulse to decipher what unifies us upwards.

The circle is an extended point and its properties are also common to those of the point: perfection, equality, absence of division or distinction. The circle is considered in its entirety to be indivisible, without beginning or end and without any variation.

It is a metaphor for eternity, perfection, the infinite and the ungraspable.

A system of formal games with the help of which men have managed, since time immemorial, to cope more or less well with their vulnerability in the face of fate.

In the book, The Symbolism of Alchemy and the Occult Arts, psychologist Herbert Silberer wrote that, «Symbolism is the most universal language that can be conceived» «Symbols touch the same chords in all men, and the individual, with each spiritual advance he makes, he will always find something new in the symbols that are already familiar to him».

This is true for all symbols. Their meaning is not exhausted by a transfiguration, but increases, as do the works of art that reveal new depths and new dimensions every time we approach them in the certainty that all possibilities are clarified at the moment of their revelation.